Are You A Rhinoceros Or An Elephant? 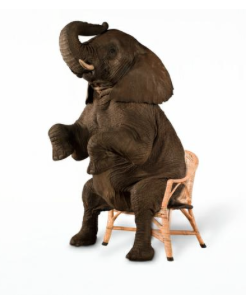 Have you ever been in a meeting where your boss or other “leader” seemed to monopolize the agenda? Most of the time was spent with the boss speaking at the attendees. I’m sure you can relate to this.

Conversely, have you been in a meeting with someone who was calm, asked few questions, sat back, and listened with great interest to what the other attendees had to say? I am sure you can think of a time when this happened as well.

Leadership is influence, nothing more and nothing less. Strong and effective leaders have influence and use this influence to engage with people to accomplish results. You have read these words before.

Yet, to have real and lasting influence, one must establish trust and rapport with others. How effective is the rhinoceros in establishing trust and rapport? These qualities virtually impossible for a rhinoceros to achieve simply because they don’t have the wherewithal to close their mouth and listen to what others have to say.

Our employees and coworkers have a deep desire to know they can trust us as leaders and influencers. And being trustworthy entails listening rather than commanding. Like him or hate him, Bill Clinton gained a great deal of the public’s trust when he was campaigning simply by saying, “I feel your pain.” He was giving his audience the message that he listened to their issues and understood what they were going through.

Leaders who gain the trust of others can then be in a position to have influence. Of course, one must behave in a way which maintains this trust, and we must follow through to deliver on our commitments.

So, are you a rhinoceros or an elephant? Consider the following:

When you converse with others, how much of the time do you speak?

If you are speaking more than 25% of the time, you may have rhinoceros tendencies. If you plan an agenda and intentionally leave time for hearing what others have to say AND are willing to incorporate their thoughts into your thinking, you have elephant tendencies. A client of mine was recently commenting on his boss, an officer within the organization. It seems the boss can’t help speaking about all the wonderful things he has been able to accumulate over the years – the latest BMW, the top this and best that. Clearly he is a rhinoceros, yet isn’t aware of the unfavorable impact he is having on others.

When you leave a meeting, do you know more than when you began?

If you believe you are the smartest person in the room and desire to maintain this image, you are in the wrong room. If you enter a meeting or conversation with other people thinking there is nothing for you to learn, you likely have rhinoceros tendencies. On the other hand, if you openly listen and have a goal of learning from various perspectives by asking curious questions and engaging in real dialogue, you have elephant tendencies. Elephants consider a meeting to be successful when afterwards they can point to a number of things they heard, became aware of, or learned that they didn’t know before.

Do people ask your opinion because they want to or have to?

How often do people seek perspective or insight from you? When they do, what is their motivation or purpose in asking? If they ask only when they need your permission or approval to do something, you may have rhinoceros tendencies. If, however, your opinions are genuinely sought out because you have a history of adding value to others, of helping them see new things, or because they trust you, you are demonstrating elephant tendencies.

When was the last time you changed your mind because of what you heard from others?

Can you recall a recent time you heard a perspective from someone else which led you to seek a different outcome than originally planned? If you have difficulty recalling an example, you are likely a rhinoceros. Being willing to change your mind is not necessarily the sign of indecisiveness; rather it is a sign of humility and acceptance of the old proverb: “Plans fail for lack of counsel, but with many advisors, they succeed.” Are you regularly seeking counsel, input, or advice from others, even those you lead?

To paraphrase the rock band The Who, “Who are you – a rhinoceros or an elephant?” The great leaders of our day (and of days past) tend to be those who listen at least twice as much as they speak. When you attempt to influence someone, they will give you one of three responses: resistance, compliance or commitment. The leaders who have established trust generally receive the response of commitment. Those who haven’t established trust receive either resistance or mere compliance. How do people respond to your influence?

If this has struck a chord and you would like to be more of an elephant than a rhinoceros, let me know. I can be of help.